Inflation could be a lot worse than what the experts fear with Australian consumers increasingly worried about prices surging and staying high for two years.

The big banks are expecting official consumer price index data for the June quarter, due out on Wednesday morning, to show headline inflation soaring at the steepest level in 32 years.

ANZ and NAB are both expecting the June quarter figures to show inflation climbing by an annual pace of 6.3 per cent, which would be the highest since 1990.

The Commonwealth Bank is predicting a 6.2 per cent CPI increase while Westpac is forecasting a 6.1 per cent rise.

Ordinary Australian consumers are even more worried with a weekly ANZ-Roy Morgan consumer poll of 1,496 people, taken last week, showing an average inflation expectation of six per cent over the next two years. 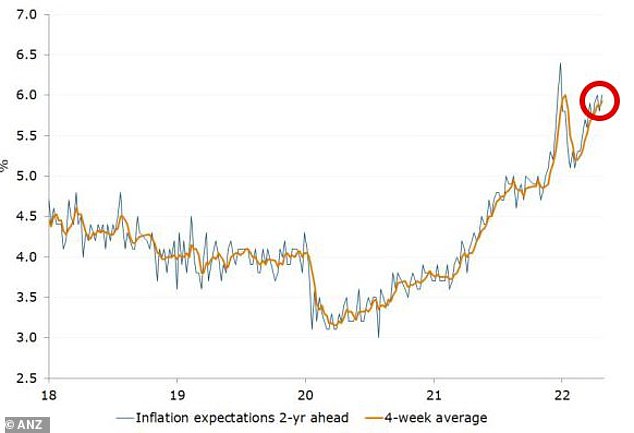 This is worse than the 5.1 per cent in the year to March, which was the worst since 2001 a year after the GST was introduced.

Inflation expectations for the June quarter

COMMONWEALTH BANK: Up 6.2 per cent

Reserve Bank of Australia governor Philip Lowe has spoken about an ‘inflation psychology’ where expectations of higher prices causes consumers to keep spending, fearing prices will keep going up.

This leads to businesses, in turn, putting up their prices.

‘If inflation expectations shift up and businesses and workers come to expect higher rates of inflation on an ongoing basis, it will be harder to return inflation to target – doing so would require higher interest rates and a sharper slowing in spending,’ Dr Lowe said last week.

Russia’s invasion of Ukraine in late February pushed national average petrol prices above $2 a litre but this week, they have moderated to $1.80 a litre.

In late March, a month after the invasion, the ANZ-Roy Morgan poll had consumer expecting inflation to be at 6.4 per cent in two years’ time. 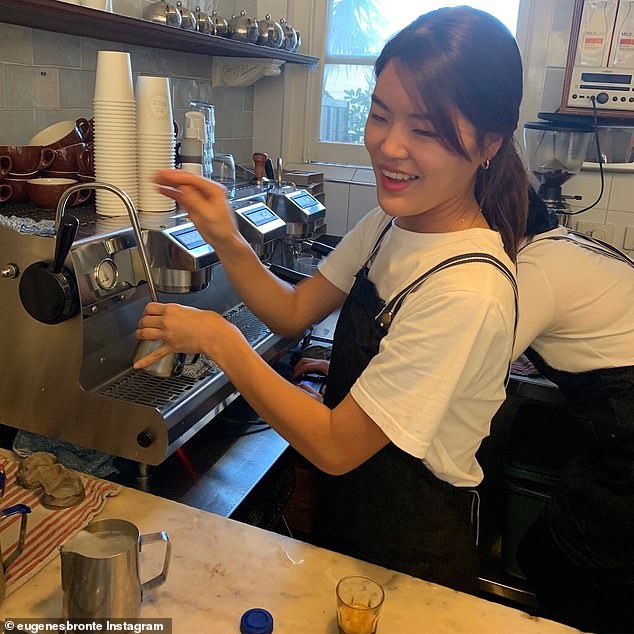 The big banks are expecting official consumer price index data for the June quarter, due out on Wednesday morning, to show headline inflation soaring at the steepest level in 32 years (pictured is a barista making coffee in Sydney)

The major banks are all expecting the RBA to raise the cash rate by 0.5 percentage points in both August and September, taking it from a three-year high of 1.35 per cent to a seven-year high of 2.35 per cent.

But a bigger-than-expected headline inflation result on Wednesday could see the RBA hike the cash rate by a bigger 75 basis points in August to 2.1 per cent.

Commonwealth Bank head of Australian economics Gareth Aird has signalled that possibility if there was a ‘material upside surprise’ in Wednesday’s Australian Bureau of Statistics CPI data.

Since March, the weekly ANZ-Roy Morgan consumer sentiment barometer has been below the key 100-point mark, which means pessimists outnumber optimists.

‘Headlines about another surge in actual inflation when the Q2 CPI is published will likely place some downward pressure on sentiment this week,’ he said.

ANZ is expecting 50 basis point rate rises in August, September, October and November that would take the cash rate to a 10-year high of 3.35 per cent.

Should that prediction materialise, a borrower with an average $600,000 mortgage would see their monthly repayments climb by $1,060 come November, compared with what they were paying in May when the RBA cash rate was still at a record-low of 0.1 per cent.

Australia faces the worst inflation since 1990, the year Iraq’s invasion of Kuwait pushed up petrol prices.

By the December quarter of that year, it was 6.9 per cent.

Dr Lowe has hinted inflation in 2022 could reach 7 per cent for the first time in 32 years.

ANZ is predicting an even more severe 7.4 per cent pace, which would be the highest since the June quarter of 1990 when it hit 7.7 per cent. 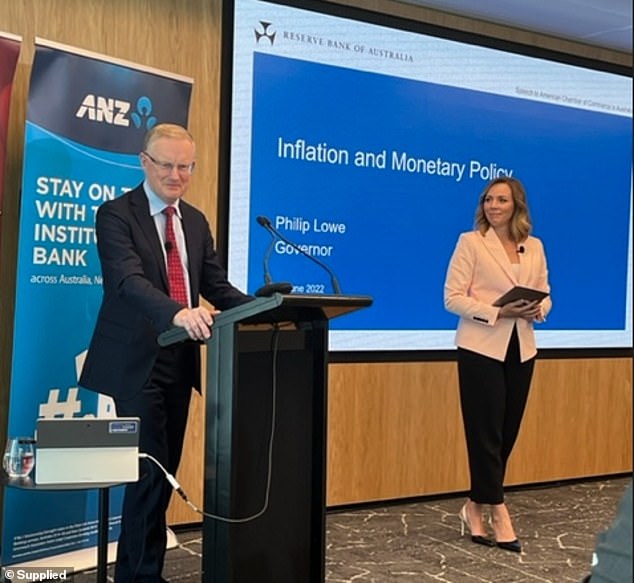 Calculations based on the cash rate rising from a record-low of 0.1 per cent in May to 3.35 per cent by November, as predicted by ANZ. Monthly repayments based on a popular variable Commonwealth Bank rate increase from 2.29 per cent to a projected 5.39 per cent

How to Hydrate, Protect & Nourish Your Skin with Natural Body Butter?

Bali, where we ate…